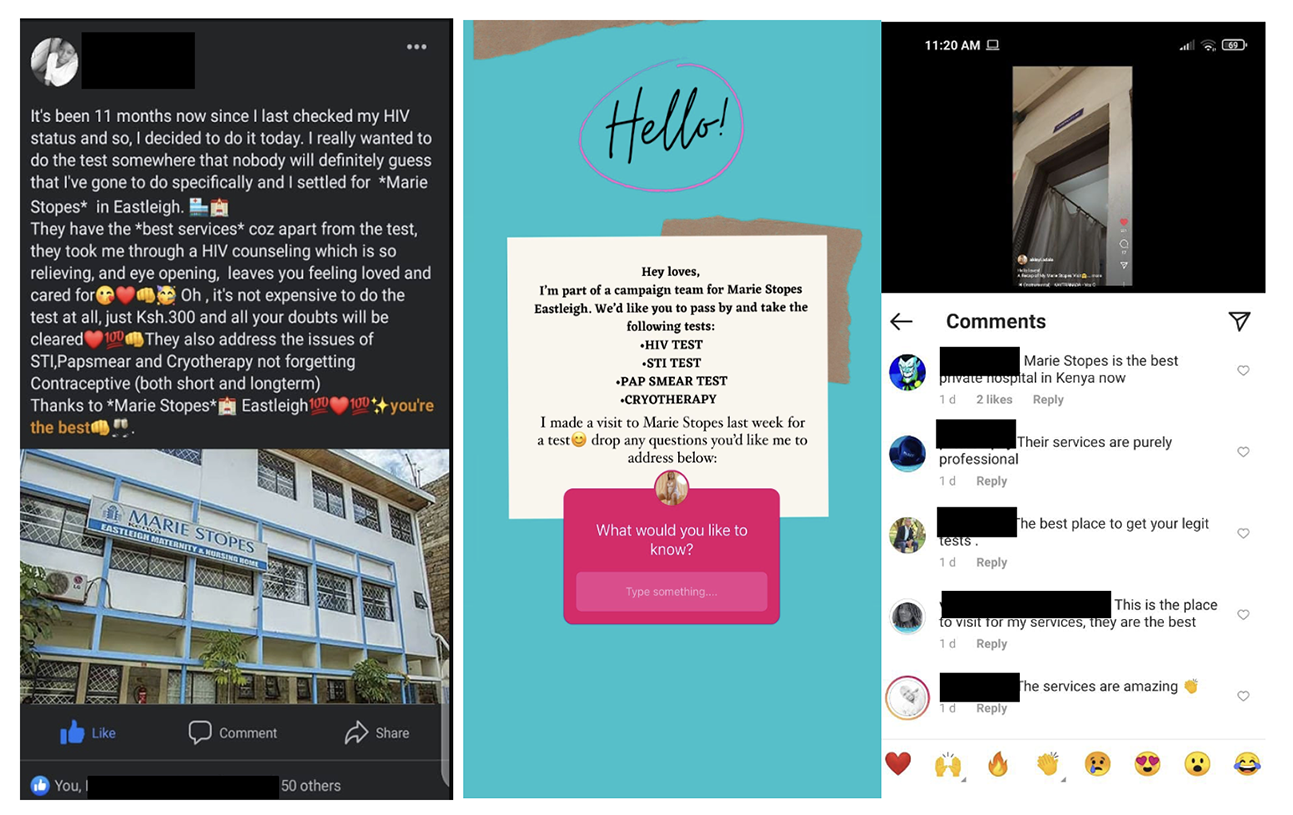 The National Academies of Sciences, Engineering, and Medicine under the Partnership for Enhanced Engagement in Research (PEER) funding mechanism.

Strategy and Investment, Services and Applications

Social media platforms have become a common source of health information among youth across the world. People rely on social media including Facebook, Instagram, Twitter, and others, to learn and improve their knowledge about HIV and sexual and reproductive health.

Marie Stopes Kenya collaborated with AIfluence to conduct a data-driven marketing campaign within a sub-region of Nairobi called Eastleigh, to increase the uptake of HIV/AIDS Testing Services (HTS), STI testing and treatment, and cervical cancer screening and testing among adolescents and young adults. These services have been limited particularly among adolescents and young adults due to the lack of awareness of safe and trusted health facilities, concerns around the cost of testing, misconceptions, and fear about the next steps in case they are diagnosed as positive.

Influencers generated their own content such as photos, videos, memes, gifs, etc. that was unique to their style, tone, and language of preference to communicate to their followers about these services at the Marie Stopes facility. This pilot aimed to drive more adolescents to these services, identify the most acceptable channels of communication, and understand the barriers to accessing these health services within this community.

The marketing campaign reached 1,549,829 people on social media. Out of the people reached, 24% were in the age range of up to 24 years while 68.1% of the audience was female and 31.9% male. During the campaign, 39% of the audience was reached on Facebook with Twitter and Instagram contributing 31% and 30% of the total reach, respectively.

Users between the ages of 18 and below made up less than 5% of users on Instagram, Twitter, and Facebook, but typically utilized platforms such as TikTok & Snapchat.

Influencers conducted surveys of their followers via social media which revealed that some of the primary concerns in seeking services included the cost of services, the distance between the facility and individual, and confidentiality. From the campaign, 97% of respondents considered the quality of service a significant factor when selecting the medical facility while 81% of respondents considered pricing a very important factor when selecting the medical facility.

The project demonstrated success in utilizing influencers for driving service demand and uptake. The following steps are to create localized microsites for each facility to share information such as clinic hours, service pricing, photographs of the facility, and more. With this information available we believe that it will address some of the concerns raised in the feedback messages and bring validity to the campaign before someone even goes to the MSI facilities. We will also launch this campaign with additional facilities and possibly broaden the focus on services to include family planning.